Oh, but modest and humble Titan, belonging to the wisest presence among our mighty Saturn’s quietly exerted magnificent gravity, where from it apparently is kept motionless as if though suspended in both time and space as one…” This lonely though partially shadowed shot of the Titan Moon emits a kind of benevolent gentleness, while giving off an inviting luster upon its green spherical globe. It warms the observer with a cool somber calming presence by giving off an even greater romantic ambience than that perhaps of our own earthly moon; and yet, personifies its singular stillness - while whispering a lofty commanding silence belonging to the most advanced Interplanetary body (Saturn) within our solar system. 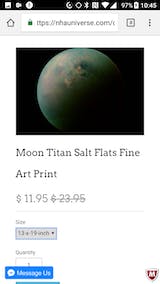