The keen observer leaves us with notable commentary here sharing with us one of the many dazzling previews into the cupboard of a seemingly non-stop display of cosmological portals comprising many-a-fantastic and never-to-be-found-a-dull-scene, from a much larger kaleidoscope of the far reaching cosmos… The great ‘Speedster Star…’ indeed, as its picturesque living light tells, suggests for itself, by achieving justice to its title, shows off its descriptive name, placed upon it literally demonstrating the empowerment of its own natural physics; as such, and thereby, ‘Shocks - The Galaxy’ and greater still-titillates the retina in no less a manner causing us all who see it with jaw-dropping, awe-inspired amazement - as it is both held and captured in eternity, for our small mortality to look upwards at in fantastic bewilderment. 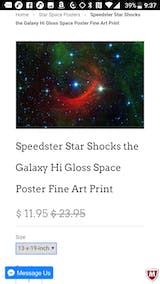