As if though having come out from nowhere, amidst the vast cloak of all-inclusive blackness which typically dominates every panoramic backdrop of the heavens, henceforth-like some omnipotent stage magician, pulling out from within its top hat of tricks, abounds forth this brilliantly radiant patch of white light. More than merely a spotlight-effect whose flashbulb sensation projects to last here but for a moment’s time is to be seen this pleasant sight of this comet’s spectacle pageantry. Although not quite as famous as that unique inductive sighting which served to historically prove the original scientific validity of Sir Isaac Newton’s famous laws of motion; (i.e., “Halley’s comet”) - it remains; nevertheless, distinguished in its own right given the name “Hale Bopp” when having been discovered just over a score of years ago. Its piquant appearance lends itself towards becoming all the more appealing in the culmination of its photogenic attainment upon its gypsy-like wanderings whilst in the local company of the nearby orbits of the planets themselves. 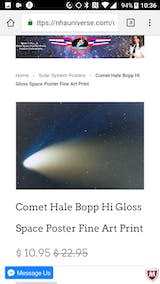